Compared to previous year the student satisfaction has improved in the UK. Britain’s average has increased from 8.8 last academic year to 9.0 this academic year, meaning that international students in the United Kingdom are more satisfied with their study experience than the previous year.
International students in the UK are pleased mostly with the vibrant social life. Although they do enjoy British cities, they do not comment on t this element as positively as international students in other European countries. British universities receive most complaints about academic aspects, accommodation, and services provided by the university which are the biggest development points. 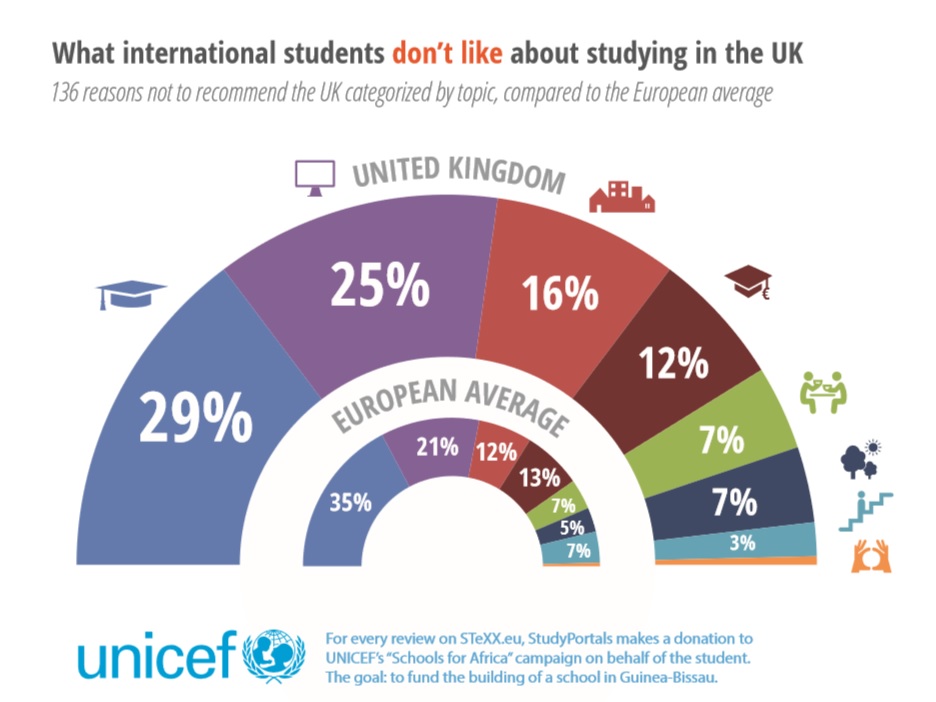 British students abroad were satisfied with their overall experience and rated it 8.3 out of 10. Popular comments were about the city and culture, closely followed by academic aspects. More than 1 out of 5 positive comments were made about city atmosphere, aesthetics, and size. British students abroad do complain about low levels of teaching, a slow bureaucratic process, and issues in finding accommodation, which comprise more than two thirds of all negative comments.

Other awarded institutions in alphabetical order StudyPortals’ main objective is to make study choice transparent globally. In a market of growing options and an increasing need for (digital) information and international comparison, the platform has rapidly established a central position for students that have an interest in studying abroad. Currently, over 1,450 universities participate, from 52 countries, creating transparency across 35,000 study programmes.
Our quality approach has allowed us to build a unique experience on how to find university programmes and present them effectively to prospective students. This empowers students worldwide to easily find and compare their ideal education, while universities benefit from well informed, quality prospective students.
Press contact: Carmen Neghina | Tel: +31 655 875 270 | Email: Carmen@studyportals.com
Download infographic here